It is the universal custom to display the American flag only from sunrise to sunset on buildings and on stationary flagstaffs in the open. However, when a patriotic effect is desired, the flag may be displayed twenty-four hours a day if properly illuminated during the hours of darkness.

The flag should be hoisted briskly and lowered ceremoniously. 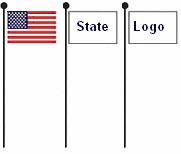 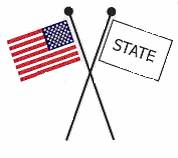 4. The American flag, when it is displayed with another flag against a wall from crossed staffs, should be on the right, the flag’s own right, and its staff should be in front of the staff of the other flag.

5. When flags of two of more nations are displayed, they are to be flown from separate staffs of the same height. The flags should be of approximately equal size. International usage forbids the display of the flag of one nation above that of another nation in time of peace. 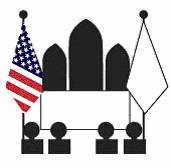 Half-Staff
We provide an email alert service of when to fly your American flag at half mast.

By order of the President, the flag shall be flown at half-staff upon the death of principal figures of the United States Government and the Governor of the State, territory or possession, as a mark of respect to their memory.
In the event of the death of other officials of foreign dignitaries, the flag is to be displayed at half-staff according to presidential instructions of orders, or in accordance with recognized customs practices not inconsistent with law. In the event of the death of a present or former official of the government of any State, territory or possession of the United States, the Governor of that State, territory or possession may proclaim that the National flag shall be flown at half-staff.
Flags flown on poles affixed to a home or building are not to be flown at half staff but a memorial streamer can be affixed to the top of the flagpole to signify half staff.

7. CASKET – When the flag is used to cover a casket, the union (blue field of stars) is at the head and over the left shoulder (of the deceased). The flag should not be lowered into the grave or allowed to touch the ground.

8. OVER A STREET – When the flag is displayed over the middle of the street, it should be suspended vertically with the union (blue field of stars) to the north over an east-west street, or to the east over a north-south street.